During a memorial symposium celebrating his professional accomplishments, mentorship, and legacy, Daniel I.C. Wang ’59, SM ’61 sometimes appeared larger than life. But amidst the flood of moving reminiscences, humorous anecdotes, and research stories about this former MIT institute professor, considered a founding father of the field of biochemical engineering, a complex, multifaceted human being sprang into vivid focus.

The two-day live event on November 4th and 5th, 2021, featured speakers from different eras of Wang’s life—from his graduate mentor, 94-year-old Arthur E. Humphrey, dean emeritus of engineering & applied sciences at the University of Pennsylvania, to recent students and colleagues.

“We all got a different part of Dan,” said Mike Thien ScD ’88, vice president of Merck. To Sherry Gu PhD ’97, senior vice president of WuXi Biologics, he was like “a Chinese grandpa or a teddybear.”  He was “a straight shooter, who didn’t leave you even after you left MIT,” said John Aunins PhD ’89 a senior advisor at Seres Therapeutics.

He could be “tough and critical, someone who loved a good sparring partner,” said Kristala Jones Prather ’94, Arthur D. Little Professor of Chemical Engineering. “Danny expected all of us to excel,” said Araba Lamousé-Smith PhD ’00, vice president of supply chain & CMC management at MacroGenics, Inc.

To student and colleague Charles Cooney PhD ’70, professor emeritus in the Department of Chemical Engineering, Wang created a community with a “dynamic impact in academia and industry that continues to flourish.”

Wang died at 84 on August 29, 2020, after serving on the MIT faculty for 55 years. His research helped spawn the hybrid discipline of biochemical engineering, which is concerned with the production of proteins through genetically engineered microbes and human cells.

The innovative technologies Wang pioneered in fermentation, bioprocess monitoring, enzyme technology, mammalian cell culture, and protein purification, among other areas, “set the stage for our modern biotechnology industry and for many of the advanced pharmaceuticals saving lives today,” said Paula Hammond, Institute Professor in Engineering and the Head of the Department of Chemical Engineering, during introductory remarks at the symposium on November 4th. “Danny had an uncanny ability to see the big picture of where the field was going.”

He co-authored hundreds of research papers, wrote books, licensed numerous patents, catalyzed careers and launched companies. But the heart of Wang’s remarkable enterprise was the community he was continuously building—a network of talented students and collaborators from around the world, on whom he had a profound impact, as speaker after speaker attested. Among this group are leaders of growing renown in the field he started.

“Danny was one of the first people I spoke with when I was starting what became Moderna in 2010,” said Noubar Afeyan PhD ’87, founder and president of Flagship Pioneering, a life sciences venture capital firm. Afeyan worried that the idea behind Moderna might be troubling to Wang. “The premise involved obviating the need for fermentation and purification in the way we knew it,” said Afeyan.  “I’d spent my life making and purifying proteins, and optimizing RNA would do away with that.” But rather than being troubled by the prospect of erasure of decades of his innovations, Afeyan said, “Danny was intrigued, telling me that this is what people said about DNA at the beginning of his work.”

Researchers at Moderna spent a decade learning to “code through software to make any protein we want” and to “tame molecules for delivery into human cells in a way that doesn’t allow an immune response,” said Afeyan. If Wang were just starting out today, he would eagerly embrace such methods, Afeyan asserted, because he always found value in leaping into unfamiliar territory.

“We must go after the important problems, and they are not sitting next to things we know how to do,” said Afeyan. “From working on mammalian proteins to mRNA, that’s not adjacent, and the exciting things happen outside.”

At Moderna, the willingness to pursue this vision over many years, solving a series of unprecedented biochemical challenges, has led to “a brave new frontier, a pioneering platform for a new class of medicines,” said Afeyan—the kind of work Wang’s “descendants are doing to try to propel his legacy.” he said.

The company’s venturesome mindset paid off in an astonishing way in 2020. The D.I.C Wang Lecture on the Frontiers of Biotechnology, held annually since 2014, was delivered by Melissa Moore PhD ’89, Moderna’s chief scientific officer for platform research. In her talk, she described the company’s sprint to create a vaccine for SARS-CoV-2.

“From idea to GMP (good manufacturing practice-approved) drug product took less than two months,” said Moore. This astonishingly quick product development came courtesy of the years Moderna had already spent designing an mRNA-based platform for a personalized cancer vaccine. “We had learned how to go from a tumor sample to personalized vaccine in 45 days, and this enabled us to see what kind of protein we needed for Sars-CoV-2.”

The mRNA vaccine blueprint for Covid-19 took researchers one hour, she said, and from there it was 44 days to National Institutes of Health approval, and nine more months to stick in arms.

The flexibility of this platform means researchers can readily adapt it as the Covid virus mutates. “We’ve been tracking the variants in real-time, and we’re making sure we’re ready to go,” said Moore. The company’s mRNA technology is also being refined for personalized cancer vaccines, and a wide array of afflictions, from cystic fibrosis to cytomegalovirus, a deadly disease of newborns and people with immune disorders.

From candy to medical revolutions

The rise of many biotech inhabitants of a crowded Kendall Square can be traced directly back to Danny Wang, said Phillip Sharp, Nobel laureate, and Institute Professor of Biology at the Koch Institute for Integrative Cancer Research.  During the energy crisis of the 1970s, Wang led a project converting corn stalks to ethanol, and this was the kind of work Sharp and other scientists wanted to pursue in their new company, Biogen. “Danny was an integral part of this, leading the company’s production and manufacturing processes,” he recalled.

His leadership in forming the Biotech Processing Engineering Center in 1985 represented “the first real integration between biological science and engineering at MIT,” Sharp said, a convergence that has only become stronger and more central to the Institute’s goals. Wang “stimulated the whole biotech industry by his engagement, training of others, and founding of an industry at a time it was in an embryonic state.”

Because of Wang, said Sharp, a moribund corner of Cambridge known for the Necco candy factory became a biotechnology R&D and manufacturing engine powering economic growth on the I-95 corridor, and beyond. “Danny changed the history of life science and health care in the world. He was a great friend, and I loved his Chinese food and his can-do attitude,” he said.

“I’m looking at the world through the lens Dan taught me to look through,” said Charles Cooney, Wang’s first graduate student. Displaying Wang’s academic family tree, with its 1453 members, Cooney and others described some lessons Wang’s students invariably picked up from him: the proper use of chopsticks, and more seriously, “stick-to-itiveness,” the importance of multidisciplinary collaborations, and of staying true to your values. “The goal is not building a plant, doing an experiment or establishing proof of concept, the goal is delivery science to society, in a sustainable way,” said Cooney.

The bearers of Wang’s legacy have taken these lessons to heart. Reshma Shetty PhD ’08 and president and co-founder of Ginkgo Bioworks, Inc, felt a “call to arms when the pandemic hit.” Her company used a cell programming platform to develop largescale Covid testing for K-12 classrooms. Bernat Olle SM ’05, MBA ’07, PhD ’07, the CEO and co-founder of Vedanta Biosciences has created a pill containing a unique cocktail of beneficial bacteria that has the potential to help patients suffering from gastrointestinal diseases and antibiotic-resistant pathogens. Luis Alvarez SM ’99, PhD ’09, founder of Theradaptive, returned from Iraq determined to help victims of war trauma. With new biologics, he is engineering implants for missing bone based on genetically engineered tissue repair.

The symposium was also an opportunity to celebrate a new branch in the Wang academic family tree.  The Departments of Chemical Engineering and Biological Engineering jointly announced a major gift from Victoria Wang.  This gift will provide further support to the Wang Professorship in Biological Engineering, and will also endow the Daniel I.C.  Wang Fellowship Fund and the Daniel I.C. Wang Faculty Research Innovation Fund.  The Wang Fellowship will support a cohort of students in both Chemical Engineering and Biological Engineering working on research in bio-manufacturing, with preference given to young women working in this discipline.  The Wang Faculty Research Innovation Fund will support mid-career faculty in both departments, providing them with seed grants to pursue high-risk, high-reward new research that has the potential to shape both the discipline and the future of their careers.  Paula Hammond shared that, “These new funds will be a fitting tribute to the twin poles of Danny’s legacy: he was a generational talent who broke boundaries and set the course for a discipline, and he was fiercely committed to nurturing the next generation of scholars.  Thanks to this gift from the Wang Family, we are honored to be able to carry on this work in Danny’s name.”

In the symposium hall, images of Wang were projected onto large screens. He beamed down as members of his extended family rose to recall his lobster meals and Karaoke get-togethers; his “naps” during research lectures that invariably ended with sharp questions for the presenter; his benevolent bullying around thesis topics, and nonnegotiable career advice; his insistence on “family first,” including championing working mothers in the department. It wasn’t hard to imagine he was taking pleasure presiding over a gathering with the people whose company he most cherished. 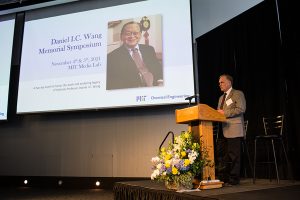 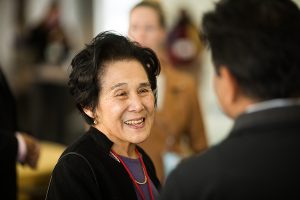 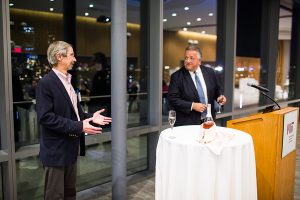 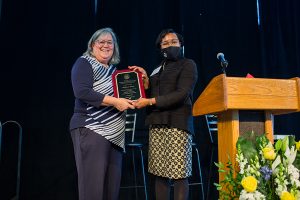