“Synthesis at the Interface of Chemistry and Biology” 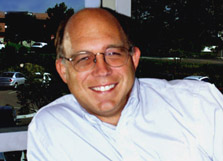 Schultz is currently the Scripps Professor of Chemistry at The Scripps Research Institute and Director of the Genomics Institute of the Novartis Research Foundation. He has made a number of major contributions to science including: (1) the discovery of catalytic antibodies, and their use to study fundamental mechanisms of biological catalysis and the evolution of binding and catalytic function; (2) the development of technology that for the first time enables the systematic expansion of the genetic codes of living organisms to include unnatural amino acids beyond the common twenty; and (3) the development and application of combinatorial methods in chemistry and biology including the first generation of combinatorial materials libraries and the isolation of molecules that control stem cell proliferation and fate.

Schultz has received numerous awards including the Alan T. Waterman Award, NSF (1988), the ACS Award in Pure Chemistry (1990), the U.C. Berkeley College of Chemistry Teaching Award (1992), the Wolf Prize in Chemistry (1994), the Paul Erhlich and Ludwig Darmstaedter Award (2002), and the ACS Arthur C. Cope Award (2006). Professor Schultz is a member of the National Academy of Sciences, USA (1993) and the Institute of Medicine of the National Academy of Sciences (1998). He is active on many editorial and scientific advisory boards and is a founder of Affymax Research Institute, Symyx Technologies, Syrrx, Kalypsys, Phenomix, Ilypsa, Ambrx and Wildcat Discovery Technolgies.