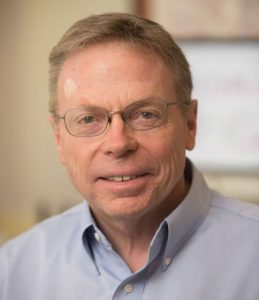 Abstract
The genetic code, elucidated in the 1960s through the work of Nirenberg, Ochoa, Khorana and their coworkers, provides a set of molecular instructions for translating nucleic acids into proteins. Through the efforts of our laboratory and others, the code has been “reinterpreted” in various ways to enable the participation of an expanded set of amino acids in cellular protein synthesis.  These developments have provided a basis for powerful new approaches to protein design and to spatially and temporally resolved analysis of cellular processes.

About David A. Tirrell
David A. Tirrell is the Ross McCollum-William H. Corcoran Professor of Chemistry and Chemical Engineering, and Provost at the California Institute of Technology. Tirrell was educated at MIT, where he did undergraduate research with Ed Merrill, and at the University of Massachusetts at Amherst, where he earned his Ph.D. for research done under the supervision of Otto Vogl. After a brief stay with Takeo Saegusa at Kyoto University, Tirrell accepted an assistant professorship in the Department of Chemistry at Carnegie-Mellon University in the fall of 1978. Tirrell returned to Amherst in 1984 and served as Director of the Materials Research Laboratory at the University of Massachusetts before moving to Caltech in 1998.  He served as chairman of the Division of Chemistry and Chemical Engineering at Caltech from 1999 until 2009, and as Director of the Beckman Institute from 2011 until 2018.  Tirrell’s research interests lie in macromolecular chemistry and in the use of non-canonical amino acids to engineer and probe protein behavior.  His contributions to these fields have been recognized by his election to the American Academy of Arts and Sciences and to all three branches (Sciences, Engineering and Medicine) of the U.S. National Academies.