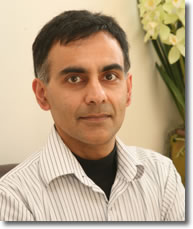 Chaitan Khosla is the Wells H. Rauser and Harold M. Petiprin Professor at Stanford University in the Departments of Chemistry, Chemical Engineering, and, by courtesy, Biochemistry. He received his PhD in 1990 at Caltech. After completing postdoctoral studies at the John Innes Centre in the UK, he joined Stanford in 1992. Over the past two decades he has studied polyketide synthases as paradigms for modular catalysis, and has exploited their properties for engineering novel antibiotics. More recently, he has investigated celiac sprue pathogenesis with the goal of developing therapies for this widespread but overlooked disease.

Professor Khosla has co-authored over 250 publications and 50 U.S. patents, and is the recipient of several awards and honors including the National Science Foundation Young Investigator Award; the David and Lucile Packard Fellowship for Science and Engineering; the Allan P. Colburn Award and the Professional Progress Award from the American Institute of Chemical Engineers; the Eli Lilly Award in Biological Chemistry, the Pure Chemistry Award, and Arthur C. Cope Scholar Award from the American Chemical Society; and the Alan T. Waterman Award from the National Science Foundation. He was elected a Fellow of the American Association for Advancement of Science in 2006, a Member of the American Academy for Arts and Science in 2007, and a member of the National Academy of Engineering in 2009. In 1995 he co-founded Kosan Biosciences, a public biotechnology company that developed new polyketide antibiotics and was acquired by Bristol Myers Squibb in 2008. He is also a founder and Director of Alvine Pharmaceuticals, a company that is developing an oral enzyme drug discovered in his laboratory for the treatment of celiac disease, and Flamentera AG, focused on the development of novel biomarkers for gastrointestinal diseases. He serves on the Scientific Advisory Boards of three renewable energy companies – LS9, Joule and Promethegen.