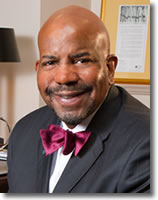 Cato T. Laurencin, M.D., Ph.D., a nationally prominent orthopaedic surgeon, bioengineering expert, administrator and professor, is the Vice President for Health Affairs at the University of Connecticut and the seventh dean of the UConn School of Medicine.

He is the Van Dusen Endowed Chair Professor in Academic Medicine and is Distinguished Professor of Orthopaedic Surgery and Chemical, Biomolecular and Materials Engineering at the University of Connecticut. Dr. Laurencin is an expert in shoulder and knee surgery and an international leader in tissue engineering research.

President Obama named Dr. Laurencin a 2009 winner of the Presidential Award for Excellence, awarded to science, math and engineering mentors. Additionally, Dr. Laurencin was recently honored by Scientific American Magazine as one of the top 50 innovators for his groundbreaking technological work in the regeneration of knee tissue. He was also recently named among “100 Chemical Engineers of the Modern Era” by the American Institute of Chemical Engineers, and is the 2009 winner of the Pierre Galletti Award, the American Institute for Medical and Biological Engineering’s highest honor.

Upon completing both of his doctoral degrees, Dr. Laurencin joined the Harvard University Orthopaedic Surgery program, ultimately becoming the chief orthopaedic surgery resident at Beth Israel Hospital in Boston. He also completed a fellowship in sports medicine and shoulder surgery at Cornell University Medical Center and the prestigious Hospital for Special Surgery, where he worked with the team physicians for the New York Mets and St. John’s University in New York.

In research, he has been funded by the National Institutes of Health, the National Science Foundation, NASA, and the Department of Defense. He has won the prestigious Nicolas Andry Award from the Association of Bone and Joint Surgeons for his work in musculoskeletal regeneration.

Dr. Laurencin is a member of the Institute of Medicine of the National Academy of Sciences.