“Recognition and Delivery: The Next Generation of Medical Microdevices” 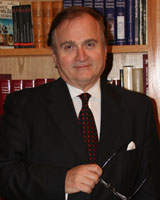 Professor Nicholas Peppas is the Fletcher Pratt Chair of Chemical Engineering, Biomedical Engineering and Pharmacy at the University of Texas at Austin. He is a leader in the fields of bionanotechnology and molecular recognition processes, nanodevices for controlled drug delivery, and intelligent biomaterials.  Among other medical devices, he has developed, patented and/or commercialized intraocular lenses, materials for vocal cord restoration, nanodelivery systems for oral administration of insulin to type I diabetic patients, and systems for oral delivery of calcitonin for treatment of postmenopausal women suffering from osteoporosis.

He is the author of 1,050 publications and 45 US and international patents, and the coauthor or coeditor of 34 books and volumes. He is one of the most cited scientists in the world. He is President of the International Union of Biomaterials Societies (2008-12) and a member of the Board of the Biomedical Engineering Society. He has served as  President of the Society for Biomaterials in 2003-04, President of the Controlled Release Society in 1987-88 and Director of AIChE in 1999-2002. Peppas has been elected a Fellow of AIMBE, APS, MRS, AIChE, SFB, AAPS, AAAS and ASEE.  He has been recognized with more than 100 national and international awards including the Founders, Walker, Institute Lecture, Materials, and Bioengineering Awards from AIChE, the Galletti Award from AIMBE and the Founders Awards of both SFB and CRS. Peppas has supervised the theses of 82 Ph.D. students, including 35 current professors in other Universities.