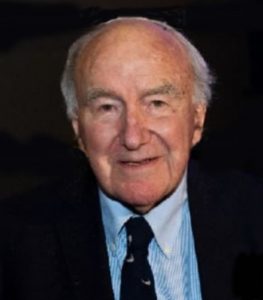 Edward W. Merrill ScD ’47, professor emeritus of chemical engineering, died peacefully at his home on August 6, 2020, at the age of 96, surrounded by his children and grandchildren.

“Ed made an indelible mark on each life he touched, professionally and personally. Not only did his research contributions help better the lives of thousands, but his commitment to education and mentorship helped shape a generation of biomedical engineers,” said Paula Hammond, David H. Koch (1962) Professor in Engineering and Head of the MIT Chemical Engineering Department, “I experienced it first hand as a student and a co-teacher; he raised the bar for all of us.”

Born in New Bedford, MA, on August 31, 1923, Merrill grew up in Jamaica Plain, MA, and West Roxbury, MA, and attended the Roxbury Latin School prior to entering Harvard College in 1941 to study the classics. He received a BA in chemistry from Harvard University in 1944 and pursued doctoral studies at MIT under the direction of Herman P. Meissner. Merrill received his ScD in 1947 working on pioneering theories and experimental studies of polymer adhesion. Upon graduation, he was employed by Dewey and Almy (later part of W.R. Grace) and joined MIT as an assistant professor of chemical engineering in 1950. Merrill was appointed the Carbon P. Dubbs Distinguished Professor of Chemical Engineering in 1973, a position he held until 1998. Merrill was a visiting lecturer in chemistry at Harvard University from 1952 to 1958, a consultant at the Peter Bent Brigham Hospital of Boston from 1960 to 1972, a consultant of the Children’s Hospital in Boston from 1969 to 1972, and a consultant of the Beth Israel Hospital in Boston from 1969 to 1985. He has also served as Chief Scientist and Consultant in Biochemical Engineering to Harvard University Health Services from 1984 to 1998. 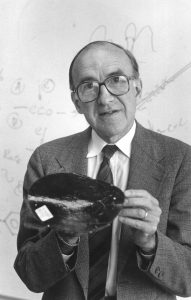 Merrill was a founder of the area of biomaterials, and over his 66 year career, he pioneered several fields of bioengineering. In the 1950s and 60s, he was the leading scientist in blood rheology. He investigated the effect of the hematocrit, various plasma proteins, and white blood cells on blood viscosity and flow behavior, and he developed appropriate experimental tools for rheological investigations of blood (including the patented GDM [Gilinson-Dauwalter-Merrill] viscometer) under realistic in-vitro conditions. In the 1960s and 1970s, Merrill was a pioneer in the development of the artificial kidney, analysis of its transport characteristics and optimization of hemodialyzer membranes. In fact, Merrill’s pioneering work on artificial kidneys, with Professor Clark Colton PhD ’69 and Robert A. Britton ScD ’67, led to the development of the first NIH guidelines for artificial kidneys in the 1960s. In the 1960s, 70s and 80s, he pioneered the field of protein/polymer interaction under stagnant and flow conditions and made exceptional contributions in the development of hydrogels as biomaterials, and in ionic or covalent heparinization techniques on polymer surfaces for antithrombogenic materials.

Merrill and Edward Saltzman of Harvard proposed polyethylene oxide (PEO) as a highly biocompatible material in a seminal 1979 paper and did significant studies to analyze its stricture and blood response. Merrill’s ideas on PEO as a non-thrombogenic biomaterial led to an explosion in the use of PEG- and PEO- decorated biomedical systems. In 1973, Merrill pioneered silicone-based contact lenses that became the basis of the hard, oxygen-permeable contact lens technology. Merrill’s work on highly cross-linked polyethylene in the 1990s with William H. Harris led to the new irradiation-cross-linked, high density polyethylene (HDPE) materials used in artificial joints such as knee and hip replacements.

Merrill’s contributions in the area of biomedical applications of aerosol engineering were also significant and led to the use of dipalmitoyl-lecithin aerosols for treatment of infants born with hyaline membrane disease (respiratory distress syndrome). Finally, he made significant and sustained contributions to drag reduction phenomena. Merrill was the inventor of more than 40 US patents and about 230 international patents.

“Professor Merrill was probably the premier biomedical engineer of the 20th century,” said Nicholas Peppas ScD ’74, the Cockrell Family Regents Chaired Professor at the University of Texas at Austin and advisee of Merrill, “Not only did he develop the fundamentals of the field, and came up with pioneering inventions of blood flow rheometers, non-thrombogenic biomaterials, advanced contact lenses, treatments of the respiratory distress syndrome, and the most successful materials for join replacements, but he also became a superb educator and mentor who directed and advised hundreds if not thousands of biomedically-oriented students of diverse backgrounds and nationalities.”

A superb teacher, Ed Merrill taught the courses on polymers, biomaterials, transport phenomena and medical sciences at MIT. His MIT course entitled, “Chemical Engineering in Medicine and Biology,” offered in 1963, was the first such course in the USA. Ed Merrill was a concerned educator and mentor who welcomed in his laboratories numerous scientists from other countries. He had a close association with Dr. Paul Rempp of the Macromolecular Center of Strasbourg, France, and in 1991 wrote an impactful book on polymers with him, Polymer Synthesis. At that time, he was also a vice-president of the Boston-Strasbourg Sister City Association and a director of the Alliance Française of Boston-Cambridge from 1990 to 1996. He was also Consultant to the Conservator, Department of Prints, Drawings, and Photographs, of the Museum of Fine Arts, Boston from 1988 to 1998.

In May 2010, MIT Chemical Engineering hosted a symposium to celebrate Professor Merrill’s many accomplishments throughout his 60-year career. Click here to view presentations by the invited speakers.

Merrill was elected a member of the AAAS, the NAE, the NAM, and the National Academy of Inventors (NAI). He received the Founders Award of the American Institute of Chemical Engineers (AIChE) in 2000, the Founders Award of the Society for Biomaterials (SFB) in 2003, and the Pierre Galletti Award from the American Institute of Medical and Biological Engineers in 2010. AIChE had also bestowed upon him the 1982 Alpha Chi Sigma Award and the 1993 Charles M. A. Stine Award. In 1990, the SFB awarded him the Clemson Award. At its Centennial Celebration in 2008, AIChE recognized him as one of the “100 Eminent Chemical Engineers of the Modern Era.”

Merrill married Genevieve de Bidart (Ginette) on August 19, 1948, in Cambridge, MA. Ginette passed away 7 months earlier on December 20, 2019. They are survived by their daughter Anne and son Frank Merrill, and their grandchildren: James, Sasha and Julia Merrill. Merrill took great pride in his two children and three grandchildren and enjoyed the time he spent with them immensely. Ed was not simply a father and grandfather, but a mentor and inspiration to all who encountered him. His presence and his wisdom will sorely be missed by all whose lives he touched, and he will be greatly missed by his family. The family has already held private services.