“Grand Challenges in Science for a Clean Energy Future” 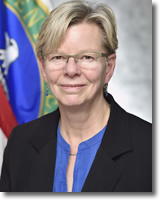 Dr. Cherry Murray was confirmed by the Senate December 10, 2015 and sworn in December 18, 2016 as the Director of the Department of Energy’s Office of Science. Dr. Murray oversees research in the areas of advanced scientific computing, basic energy sciences, biological and environmental sciences, fusion energy sciences, high energy physics, and nuclear physics. She has responsibility not only for supporting scientific research, but also for the development, construction, and operation of unique, open-access scientific user facilities. The Office of Science manages 10 of the Department’s 17 National Laboratories.

Dr. Murray served as dean of Harvard University’s John A. Paulson School of Engineering and Applied Sciences from July 1, 2009 until December 31, 2014. She also holds Harvard’s Benjamin Pierce Professorship of Technology and Public Policy, and Professor of Physics.  Dr. Murray served as Principal Associate Director for Science and Technology at Lawrence Livermore National Laboratory from 2007 to 2009 and as Deputy Director for Science and Technology from 2004 to 2007. Dr. Murray held a number of positions at Bell Laboratories, Lucent Technologies, formerly AT&T Bell Laboratories and previously Bell Telephone Laboratories, Inc. from 1978 to 2004.  She began as a Member of Technical Staff within the Physical Research Laboratory and eventually finished her tenure as Senior Vice President for Physical Sciences and Wireless Research.

Dr. Murray was elected to the National Academy of Sciences in 1999, the American Academy of Arts and Sciences in 2001, and the National Academy of Engineering in 2002.  Dr. Murray was appointed to the National Commission on the BP Deepwater Horizon Oil Spill and Offshore Drilling in 2010.  She was also awarded the National Medal of Technology and Innovation by the White House in 2014 for contributions to the advancement of devices for telecommunications, the use of light for studying matter, and for leadership in the development of the STEM workforce in the United States.  Dr. Murray received a B.S. and a Ph.D. in physics from the Massachusetts Institute of Technology.