“Our Energy Future: Why American science and engineering must lead the way“ 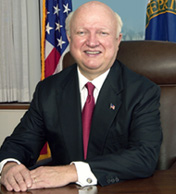 Samuel Wright Bodman became the 11th Secretary of Energy upon a unanimous confirmation by the United States Senate on February 1, 2005.  He leads the Department of Energy with a budget in excess of $23 billion and over 100,000 federal and contractor employees.

Born in 1938 in Chicago, he graduated in 1961 with a B.S. in chemical engineering from Cornell University. In 1965, he completed his ScD at Massachusetts Institute of Technology. For the next six years he served as an Associate Professor of Chemical Engineering at MIT and began his work in the financial sector as Technical Director of the American Research and Development Corporation, a pioneer venture capital firm. He and his colleagues provided financial and managerial support to scores of new business enterprises located throughout the United States.

From there, Secretary Bodman went to Fidelity Venture Associates, a division of the Fidelity Investments. In 1983 he was named President and Chief Operating Officer of Fidelity Investments and a Director of the Fidelity Group of Mutual Funds. In 1987, he joined Cabot Corporation, a Boston-based Fortune 300 company with global business activities in specialty chemicals and materials, where he served as Chairman, CEO, and a Director. Over the years, he has been a Director of many other publicly owned corporations.

Secretary Bodman has also been active in public service. He is a former Director of M.I.T.’s School of Engineering Practice and a former member of the M.I.T. Commission on Education. He also served as a member of the Executive and Investment Committees at M.I.T., a member of the American Academy of Arts & Sciences, and a Trustee of the Isabella Stewart Gardner Museum and the New England Aquarium.