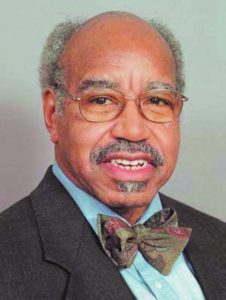 On Thursday, February 13, 2020, Dr. Henry Brown, SM ’56, passed away. Dr. Brown was well known as an advocate for minorities in engineering, especially chemical engineering.   An AIChE Fellow and a recipient of many honors, he was a very active MIT alumnus and advocate. Many in the Department know him from his frequent visits and special events throughout the year. He is dearly missed.

Dr. Brown is one of the original advocates for minority engineers in AIChE, beginning in 1968. He co-created AIChE’s first outreach initiatives for underrepresented engineers, and held the position of AIChE’s Minority Affairs Coordinator from 1983 through 2001. Dr. Brown was one of the founders of the New Jersey State Urban Science Education Coalition, and is a Diamond Life Member of the National Association for the Advancement of Colored People (NAACP).

Dr. Brown earned his BS in chemical engineering from the University of Cincinnati in 1955, where he was the first African American to do so. Dr. Brown has received an array of awards for his work, which include: the Martin K. Simberloff Memorial Award in 1960, presented by the Urban League of Union County, New Jersey; the Big Brother Award for Outstanding Service to Youth in 1965, the Distinguished Alumni Award , presented by the University of Cincinnati in 1983; the F.J. and Dorothy Van Antwerpen Award for Service to the Institute, presented by the AIChE in 1996; an honorary doctorate of science degree from the University of Cincinnati in 2001; and the 2004 Grimes and 2015 Pioneer of Diversity Awards, both presented by the AIChE’s Minority Affairs Committee. In 2018, the AIChE renamed their Minority Affairs Committee Endowment Fund the Henry T. and Melinda C. Brown Minority Affairs Endowment Fund.

In 2018, AIChE established in the Henry T. Brown Endowment for the Education of Underrepresented Minority Chemical Engineers, a key program to support the advancement of diversity and inclusion in AIChE and the chemical engineering profession. Gerry Lessells, a longtime friend of Dr. Brown who collaborated with him on AIChE’s earliest minority outreach activities, made the initial gift. He says of Dr. Brown, “Henry has given unstintingly of himself in expanding AIChE’s diversity and inclusion over a period of 50 years…  This is especially true of his getting the Institute to establish its Minority Affairs Committee and his continually nurturing over a 27-year period the activities and membership of this most important National Committee.”

In 2017, in an interview with AIChE, Dr. Brown discussed the future of chemical engineering education. https://www.blackhistory.mit.edu/archive/henry-brown-future-chemical-engineering-education-2017

Funeral services will be on Saturday, February 29th at Myrtle Baptist Church in West Newton, MA.